"Home From School: The Children of Carlisle" Receives Top Honors 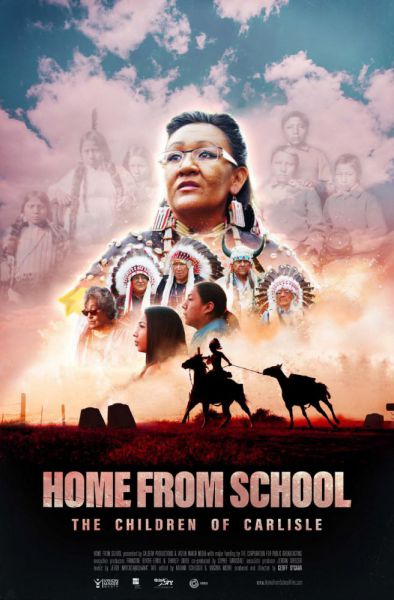 “Home From School: The Children of Carlisle”, a documentary, supported in part by Cultural Trust Fund grants, about Native American children who died after being taken from their tribe and family to a federal boarding school, has won several top awards and honors in recent weeks as the film makes its rounds at regional events and film festivals. The film will be broadcast nationally on the PBS series INDEPENDENT LENS November 23, 2021.

The documentary tells the story of the Northern Arapaho tribe’s long battle to retrieve the remains of three boys who were buried at the Carlisle Indian Industrial School in Pennsylvania, far from their home on the Wind River Reservation in Wyoming.


The three boys – Little Plume, Little Chief, and Horse – died in the 1880s at the boarding school, which was set up in the 19th century to “assimilate” Native American children by removing them from their families and communities, prohibiting native language, and ordering their lives in a military-style regimen of education. Exposed to European diseases, and deprived of emotional support, hundreds of them died at the school.


The Carlisle model was emulated by dozens of other boarding schools around the country, some government-sponsored and some affiliated with churches. The program impacted thousands of children from over 500 tribes.


In accepting the Best U.S. Documentary Award in Ohio Jordan Dresser, an Associate Producer of the film and currently the Chairman of the Northern Arapaho Business Council, said, “it was very important for the Northern Arapaho Tribe to bring back our children and important to tell the story not only for our own personal healing but also to share (the story) with the world.”


“These pages are missing from American history books, despite or perhaps because it was a huge program of what some scholars have called ‘cultural genocide’,” said Producer/Director Geoffrey O’Gara. “We’re a relatively young country, and our history is very close and alive.”


Also announced in recent weeks is “Home From School’s” national broadcast premiere on the acclaimed PBS series, INDEPENDENT LENS. The film will be shown on November 23, 2021 at 9:00 p.m. ET (check local listings). The film will also be available to stream on the PBS Video app.


"As the national conversation has been stirred around the legacy of boarding schools for Native Americans, we hope that ‘Home From School’ can bring forward the important history and context needed to understand this dark chapter in American history”, says Rose Steller Burke of Caldera Productions. “We are excited to be bringing the film to a wide range of audiences in the coming year and offering a much needed start to a dialogue around truth and healing of our nation’s past.”